Semiconductor micro-lasers are regarded as a promising ultra-compact light source for integration with the unique advantages of ultralow energy consumption and small footprint for various applications such as Lidar, VR/AR glasses, 3D imaging, etc. However, the monolithic integration of III-V micro-lasers with Si substrates remains challenging due to the large material dissimilarities between III-V compounds and group IV materials.

In the past decade, groups from Intel, UCSB, HKUST, UCL, CNRS, etc. have made progress in millimeter-sized lasers directly grown on Si (001) substrates. However, there’re very few reports on micro-lasers and their thresholds were relatively high. Our recent work realized ultra-small lasers monolithically grown on metal-oxide-semiconductor (CMOS)-compatible on-axis Si (001) substrates with a very low threshold at room temperature with continuous optical pumping. Besides, we were able to control the lasing precisely from the ground state or specific excited states of QDs. To our knowledge, we have achieved the first photonic crystal lasers directly grown on Si (001), which paves the way for future commercial photonic integrated circuits based on silicon photonics.

Prof. Zhaoyu ZHANG received his B.S. and M.S. degree in Applied Mechanics from University of Science and Technology of China, Hefei, China, in 1998 and 2001 respectively. He received Ph.D. degree from California Institute of Technology, Pasadena USA in 2007 in Electrical Engineering. From 2008 to 2011, he worked in University of California, Berkeley as a postdoctoral fellow in College of Chemistry, with a joint appointment with Lawrence Berkeley National Laboratory. From 2011 to 2015, he worked in Peking University as an Associate Professor and led a team of “Nano OptoElectronics Lab (NOEL)”. In 2015, he and his team moved to The Chinese University of Hong Kong, Shenzhen. In 2016, he was approved to set up Key Laboratory of Semiconductor laser, Shenzhen and be the director. His main achievements including the first demonstration of red-emission photonic crystal lasers, wavelength-scale micro-lasers with physical size smaller than 1 micron, microfluidic microlasers based on dye materials, as well as the first demonstration of photonic crystal lasers directly grown on silicon substrates. He has published more than 20 referred papers on renowned journals including Nature Communications, Advanced Materials, Physics Review Letters, Optica, Photonics research, Optics Letters, Applied Physics Letters, etc. 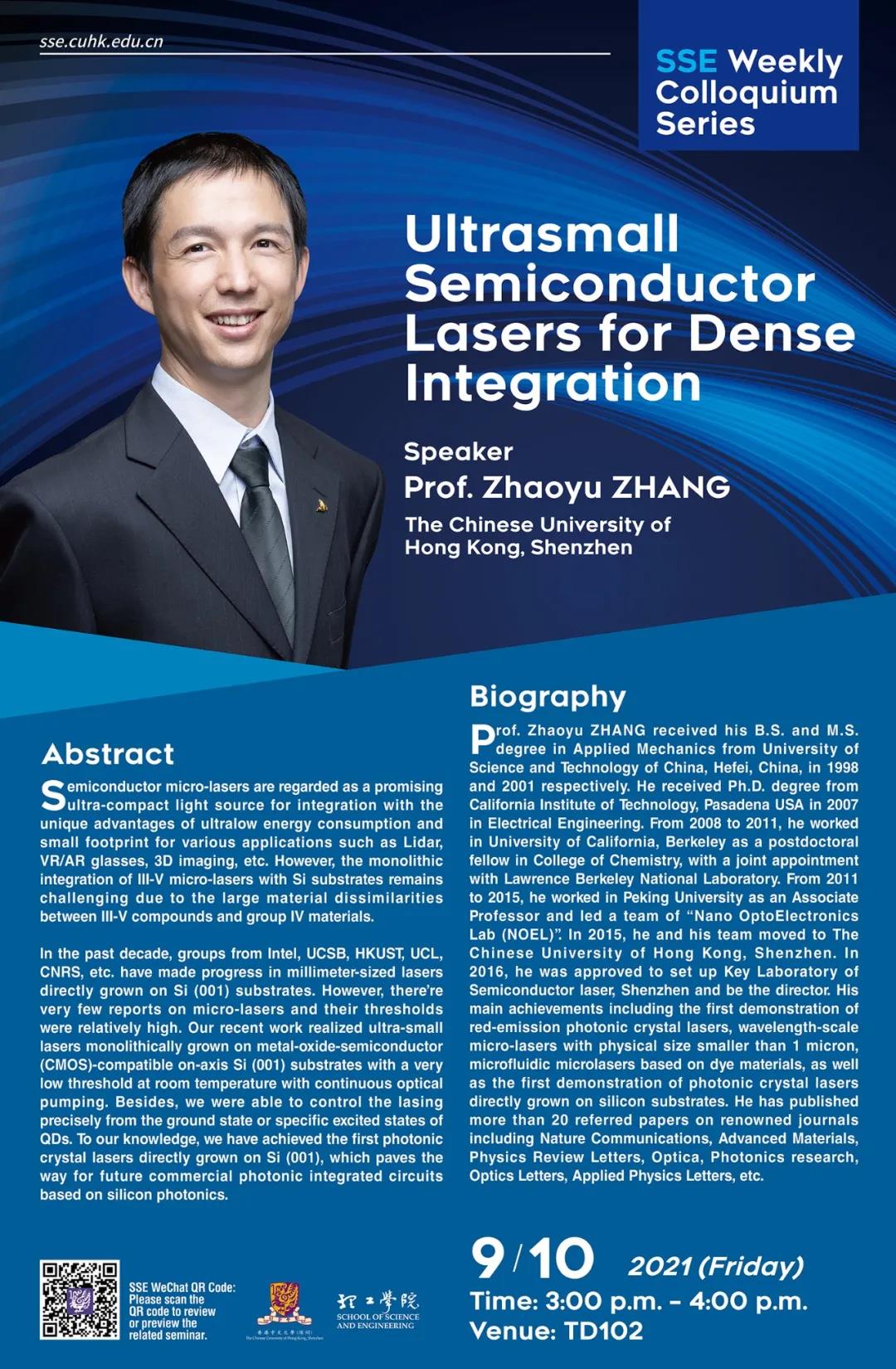