Deep Fashion3D Dataset, a team project led by Dr. Han Xiaoguang from the School of Science and Engineering (SSE), the Future Network of Intelligence Institute (FNii) and the Shenzhen Research Institute of Big Data (SRIBD) at CUHK-Shenzhen, was recently awarded the 2020 Chinagraph Award for Graphical Open Source Datasets. 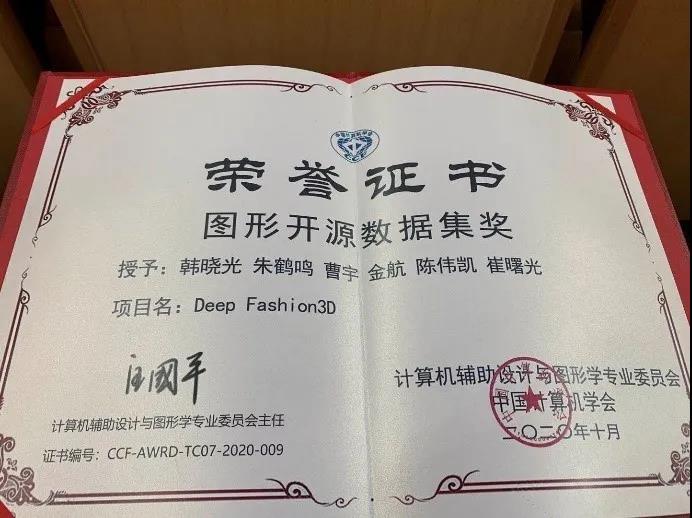 Chinagraph, hailed as the highest level academic conference in the field of computer graphics in China, was initiated and sponsored by the China Computer Federation, Chinese Association of Automation, China Society of Image and Graphics, Chinese Association for System Simulation and Hong Kong Society for Multimedia & Image Computing in 1996, and has been held for 12 sessions so far.

The Graphical Open Source Datasets Award, which was first launched this year, aims to recognize Chinese scholars, companies or students who have contributed to making open source software and datasets related to computer graphics available to the public. The recipient’s discoveries and sharing are believed to help others quickly validate existing methods and increase the impact of computer graphics, whose applications will also be further and more widely accessible due to the contributors' underlying open source code libraries, application algorithm libraries, and graphical datasets.

To facilitate future research on 3D garment reasoning, the researchers provide additional annotations specifically tailored for Deep Fashion3D, including 3D feature lines, 3D body pose and the corresponded multi-view real images. This has made the project much richer than the existing open 3D garment dataset. In particular, the first proposed feature line annotation is able to showcase the most representative parts of 3D garments, including collar, cuffs, shoulders and hem, which offers crucial information for 3D garment reconstruction and other related tasks.

Since its release one month ago, Deep Fashion3D dataset has attracted the attention of more than fifty universities and corporate researchers at home and abroad, which is of great significance for the future development of 3D vision and graphics.

Relying on the Deep Fashion3D dataset, the team also proposed a novel baseline approach that leverages the merits of both mesh and implicit representations, and is capable of inferring realistic 3D garments from a single image. For the mesh representations, the model generates 3D garment feature lines based on the input images, which are used to transform the garment template mesh into a shape similar to that in the image. On the implicit hand, the model predicts high-frequency details of the garment from the input images, and migrate them to the garment template mesh generated in the explicit branch, thus achieving the highest reconstruction accuracy on single-view garment reconstruction. "Deep Fashion3D: A Dataset and Benchmark for 3D Garment Reconstruction from Single Images," an article derived from the project, was also accepted as an Oral presentation (Top 2%) at ECCV2020, one of the three top conferences in computer vision. Dr. Han Xiaoguang is currently an associate professor of The Chinese University of Hong Kong, Shenzhen and a Research Scientist at Shenzhen Research Institute of Big Data (SRIBD). His research interests include computer vision, computer graphics, VR, and medical image analysis. He had already published 40 papers at the leading conferences and journals, including SIGGRAPH, CVPR, ICCV, AAAI, ACM TOG, IEEE TVCG etc. He got the best demo award at Siggraph Asia 2013 emerging technology; one of his paper was selected as one of the notable articles of the 21st annual best of computing; two of his work have been selected as the CVPR 2019/2020 best paper finalist (acceptance rate is around 0.8% and 0.4%); his team also got the 1st place of IEEE ICDM Global A.I. Challenge on Meteorology (out of 1700 teams).